I think that one of the most helpful things for me this semester was simply having a space to learn new or develop existing digital media skills. The structured environment, lessons, and helpful feedback really helped me to be sure that I was focusing my best efforts on learning and improving rather than merely repeating what I may already know. I also found the group critique days particularly helpful to hear feedback from classmates and also to see what others were working on to help me with ideas of what I liked (or didn’t like as much) and how I could incorporate those ideas or elements into my own work. It was a useful exercise to learn how to appropriately adjust text for different mediums and the impact that has on the reader and the creator.

In a way, I feel as though I got less capable, confident, and successful as the semester progressed. I feel most strongly about my abilities with photo editing and designing for print because I have had the most experience in that area. I was easily able to edit and modify my works and had a clear image of what I wanted to create and what steps and skills I would need to accomplish that. For the audio unit, I had a clear concept of what I wished to create but the techniques and software were all new to me. I was easily able to figure out how to use Audible and create my project though. I would say I am most proud of the final product in this unit (and was very pleased to submit it for the Student Digital Showcase, thanks!) Lastly, the markup and collaborative units were the hardest and most difficult for me to accomplish. (My collaborative unit reflection is submitted in the part below.) I found great help in the Interneting is Hard tutorial, but once I surpassed that guide-book and was on my own, I felt rather lost. I have heard from others outside this class that markup and coding is like learning a new language, and boy, do I agree with that. Even once I got familiar with the component I was working on, I felt that I went back to square one again when trying to tackle the next component needed for the final presentation. I would like to say that I am most improved in this area. I have no doubt learned the greatest amount of new information and spent the most time learning it. It was one of my goals entering this class to gain knowledge about markup and I feel that I did so. I am not at the level of proficiency that I wished to achieve, but I now know that that goal was a bit overzealous considering where I started and the amount of time I had to get to that point. This class was a challenge that I fully embraced and enjoyed.

I suppose that something that was surprising to me was the way in which we created a contract and rubrics as a whole class. A pleasant surprise, no doubt. This helped make it very clear what was expected from us and also was a great way to deal with the fact that each person in the class had a different level of comfort and proficiency with the tools and assignments that we were working on. My only revision or suggestion would be to incorporate a little bit more (or different method of?) in-class learning at the beginning of the markup unit. I know that the class had different experience levels, but I feel as though we had a little bit more of an initial introduction and lesson in our other units than we did in the markup one. I might feel that way simply because markup was completely new to me and the others weren’t as much, but even audio was new to me and I still felt more comfortable getting started on my own. Or maybe one more week to complete the unit would benefit the class to the same degree. In the end, this unit felt more rushed than the others. We did end up extending it a week, so maybe it would benefit future classes to have a longer window to begin with.

Moving forward after my graduation this December, I see digital media playing a large part in my professional life. I majored in marketing and am looking at and applying to a number of jobs in that field, most of which involve digital media in some regard. I have had experience already running social media for a number of local small businesses (why I chose to challenge myself and not sign up for one of those groups for the collaborative unit) and expect that, or some other digital media concept, to appear and require my attention in my next job. I very much enjoy working with digital media as a way to communicate with people and also express myself, so even if it is not job related I expect I will continue practicing my new-found skills.
Additionally, I intend to find a way to continue learning more about markup. Whether that be by finding and following more tutorials, finding another class that I can enroll in, or simply fussing around on my own, it is a skill I wish to continue to develop and to achieve a level of comfort where it will no longer be so daunting and so time consuming to do. I still hope to create a site that acts as an interactive database for trivia nights in Pittsburgh, that has been an idea I have wanted to see come to fruition for quite some time now, and I have a strong desire to have a big role in that process of designing and creating the site rather than hiring others to do it for me.

Visual
For this project, I had a very clear thought and image for what I wanted to present. I was also pretty familiar with the tools used for visual design for print so my challenge for myself was to create a project that clearly spoke to a particular audience and effectively communicated my message. I designed a flyer for a week of George Romero movies that I wanted to be directed very specifically at the audience who would come see his films while maintaining the branding and style of Row House Cinema. 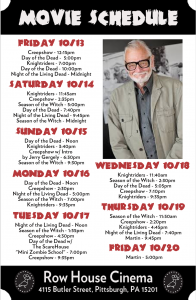 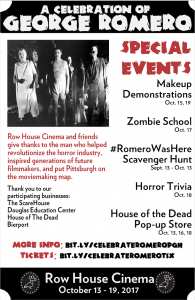 Audio
The audio project was a newer experience for me and it took me longer to fully develop my idea and creative vision. Learning how to use an audio editing program was new to me as well, but it was fairly straight-forward and easy for me to understand. Combining the tracks effectively, editing my text, and finding the most appropriate sounds for my piece were all steps I took to create my final product in its best form. I strived to make a satirical version of my 11th grade English journal assignment by utilizing the appropriate sounds and effects throughout my piece. 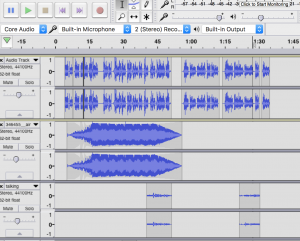 Markup
As I mentioned above, this unit was the most challenging for me. My original product was borderline A-level work (and I wasn’t super proud of it) so I made an effort to redesign my site without using flexbox to see if I could create a more modern and visually appealing website for a better final grade. I utilized a different image and link and I structured the page with clear headings and all the text along the center axis. It was still challenging for me to redesign this website from scratch, but much less so than the first time and I was able to do it much more quickly. I sourced the background image from Pixabay under a CC0 license. 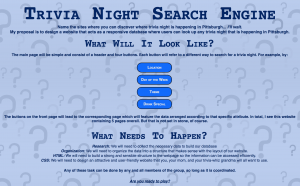 Collaborative (this is my reflection)
For this unit, I was part of the Data Visualization group. I selected this group as my top choice because it was the most interesting to me, but also because I have already been working for businesses running their social media accounts so I have a lot of experience in that area already. I also wanted to challenge myself to learn more about coding and how that all works. I initially attempted to create my chart using Google charts but had a difficult time understanding how to work that program or read the documentation clearly, so I found another resource that I was able to understand better – Chart.js. Chart.js is an open source software with an MIT License so it was free to use as long as we made a note that I used the resource.
This resource was much easier for me to determine the separate components that I would need to change in order to make the chart fit my needs. The original chart had a few lines of randomly generated data and buttons with options to add or remove more random data. For my charts, I removed the buttons, entered my data, and separated the lines into three separate charts. The reason why I separated the charts was because the units for each line (in-store, online, or per-person spending) were so vastly different that when combined all on one chart that the variation in spending was much less clear.
Because I used a different resource, however, embedding the charts into the site required a different method and was a challenge for us to figure out. After many attempts by Gabi to embed it using CodeEmbed we decide we needed to find another approach. You helped us realize that a simple iframe could work. WordPress doesn’t acknowledge the iframe code, however, so I found a plugin that would enable it to work on the site. After downloading the plugin, I was able to easily insert the iframe code into the CodeEmbed plugin and the charts appeared. Initially, my per-person chart didn’t appear on the WordPress site for a reason unknown to me but the next day when I checked it worked so luckily I didn’t have to troubleshoot that error.
Overall, this project taught me more about html markup and css, some beginner level JavaScript, and more about how to personalize and edit a WordPress page. I feel that working in a group was a great help and support because I had direct access to people who knew more about coding than I did who could help me. In the end, this project has made me feel slightly more confident about coding, but even more confident about finding resources for help and being able to understand what I am reading in those resources. 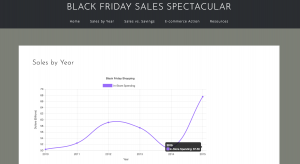