I don’t know what composing digital media might mean to me in the future. At present, it’s an amalgam of experiments of the visual, aural, webslinging, and collaborative varieties. I’ve treated this as a type of survey course. And because of the breadth of the subject matter and projects (despite the pesky tutorial time), I’ve kindled an interest in some of what we experimented with. Especially when I got into HTML and CSS, I told Kayla that we should learn some web-designing and coding together. I sorely wish we could’ve spent more time with web-design, and I’ll probably fiddle with more tutorials over Winter break.

But when I discuss my affinity for web coding, that circles around my original goals for the course, from the beginning and middle. In terms of beginning goals, I honestly had none other than taking another with you and to fulfill a PPW requirement in a subject I was curious about. Nothing about digital media was familiar to me. (‘New Media’ was a foreign term.) But thankfully, I came to realize that this class rekindled my interest in audio production and editing, and then sparked a new interest in web-design. (The greatest surprise of this course is that I like web-designing at all. That was completely unexpected, and I thought I would fight that unit like a luddite.) My middle-term goals changed, because of the audio and webslinging projects, to as much as possible enjoy learning about digital media. I was determined to overturn the fallout of my sour attitudes toward GIMP.

The most challenging part of the course was the visual unit. Not figuring out the functions of many of GIMP’s tools, having a moderately functional sense of visual balance and coherence, and just getting frustrated with the program made for a convoluted production process. For my purposes, I’d rather change the goal of the visual unit to creating the internal layout of a journal or the spread of a newspaper. That goal aligns better with my publication aspirations. Had I gone that route, I probably would’ve suffered through GIMP and been happier with the production process. That being said, I’m proud of myself in where I took the visual project. I tackled a hard issue in German politics in a dystopian fashion. That counts as a strength, and so do my audio and visual chops.

As for some of the most helpful advice, that about version control rose to the top. I’ve been reluctant to admit that it’s the sanest idea for writers to save multiple drafts of their work. Whenever working on any paper, I would only revise the version I started as a draft. No other versions would exist. However, because coding can be finicky, and revisions can cause malfunctions, I learned the importance of saving previous drafts of work and deciding how to really integrate what you want to do in the revision into the whole work in a way that allows the program to still run (in terms of writing, program and run can respectively be substituted with ‘poem’ and ‘be interpretable’).

Now, introducing the projects, I’ll first attend to the visual. Looking back on it, the turmoil in producing this thing wrought something of balance, disturbed creativity, and political import. Some of the copy could’ve been written better, but…I made the mistake of joining all the layers together. A glaring typo also makes me cringe. The intention behind the ‘better voice’ portion could have also been better planned out to match the copy. In this sense, I could’ve improved the elements in the visual I made if I had granted myself more patience with GIMP and generally with visual production. 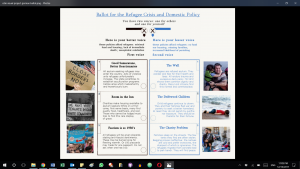 The audio project proved the most fun in this course for me. Though I was in old, familiar territory in regards to this program, this class gave me the chance to experiment with it again in previously untried ways. I believe I really strutted my stuff on this project. Adjusting the audio balance to enrich it, splicing and recombing separate audio tracks, and generating the music and content were all wonderful to do, and I believe I created something quite cool. In future experiments, I could play around with the type of music and content to better match some genre conventions. Especially with this project, the poem being an encomium mixed with valediction, I’m not sure what genre conventions I could follow. (I’m not sure what John Donne or Denise Levertov would have to say.) 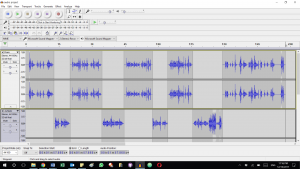 I’m most proud of the HTML and CSS project. Both of these languages were totally foreign to me, but I managed to tackle many of their conventions, vocabulary, and syntax with far more ease than I could’ve imagined. Web programming came unbelievably easy to me. I think here I managed to best employ balances between copy and design. This is by far not the prettiest thing I could’ve made, but I’m happy with how it turned out. My greatest source of joy from the webslinging project is that it’s sparked curiosity for other programming languages. If I can get a good hold on HTML and CSS (and a bit of JS, though it feels like scripting a conniption fit), then I can likely not feel intimidated by Python and other languages. 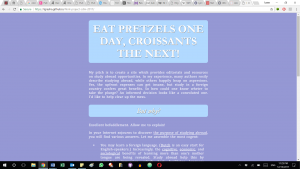 And finally, the collaborative project. It was helpful to learn how to work with WordPress, in terms of using plug-ins and trying to include user-generated code into the framework. But…if I could design my own website over using WordPress, I would do that any day of the year. The graphics formatted well enough, and so did the information on each of the graphs, but I felt especially constrained in using Google charts. I know there are ways to adjust the CSS and layout of each graph we used, but the methods to do so seemed draconian. That fact made me feel that I had lessened creative control compared to the previous three projects. But otherwise, I think the collaborative was a decent group experience. 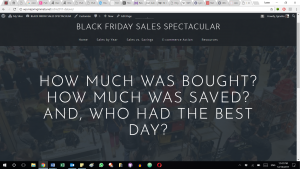 Overall, I’m thankful I took this course! I think, under your instruction, Ben, that this was a valuable learning experience.