Entering this class at the beginning of the semester, I’m not sure I knew exactly what to expect. I was confident with my writing skills and ability to compose a creative work, so I wanted to improve my ability to combine my writing with new mediums of design. However, I had no idea the depths in which I would dive into foreign lands such as HTML and CSS.

Looking back, I think I have been the most successful in translating my written text into an audio project. This was something relatively foreign to me, and allowed me to achieve my goal of combining my writing seamlessly with a new medium. However, when it comes to mediums more difficult for me such as website design, I think I still am a little uncomfortable. I am very proud of how far I have come throughout the course of the semester with HTML and CSS, as my skills improved greatly from the website unit to the final group unit, but I definitely still feel a level of discomfort with markup. If I chose to pursue a career with web design in the future (which if I’m being honest, is unlikely) I would get around this barrier by simply diving deeper into educating myself about it and practicing, practicing, PRACTICING. Truly what allowed me to learn the most was working more and more with HTML and CSS, which gave me more chances to make mistakes and learn from them.

Honestly, the structure of this course in general really sculpted the way I look at composing digital media in general. I feel like before this class, my perception of digital media only spanned so far as utilizing Photoshop to create a visual work. Now I fully appreciate that there are other channels for expression such as audio and web design that can be utilized to bring a textual work to life. Ben, you really engraved that in me as well as I frequently misused the term “content” to only refer to text, when really “content” can take all sorts of shapes and forms.

One thing that surprised me during the course was the HTML and CSS that I mentioned I struggled with. I had no clue when I enrolled in the course that we would delve into the world of markup, but am glad now that I can say I have that experience. Moving forward, I don’t think I will code from scratch that often, but I definitely would like to improve my website design skills using platforms such as WordPress that make it a bit easier for designers. I also would like to continue to push myself to explore new applications and methods of design with which I have never worked. To adopt a mindset that you can continuously grow and learn I think is extremely positive for the creative spirit.

I had the most prior experience working with visual design coming into this unit. I had mainly worked with Photoshop though, so I challenged myself to learn GIMP instead of reverting to my comfort zone. I immediately thought to do a poster for one of my life's passions, rowing, as I often find the best work spurs from what you are most passionate about. I found this beautiful picture of my team rowing on the Allegheny with the Pittsburgh skyline in the background, and the rest of the design was inspired from there. Overall, I enjoyed this unit and did not have too many difficulties. The biggest difficultly were honestly learning how to use GitHub. Looking back through my visual repository, I only see a few previous drafts, though I know I had far more, which is due to my struggles learning to use GitHub. 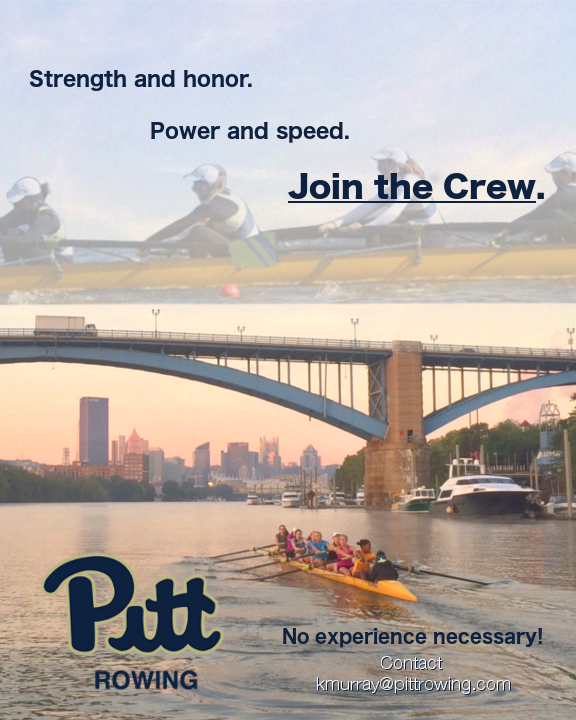 The audio project came next, with which I had the second most experience. Though I had never worked on solely editing audio, I had dabbled in video creation which deals with snipping audio files. The level to which I altered and combined various audio files together to create one harmonious piece was something that I have never done before. I am extremely proud of how my project turned out, and think I was able to maintain a high level of emphasis and balance throughout the piece in order to capture the attention of the listener. I actually think that the original written piece works even better now that it has been translated into audio. 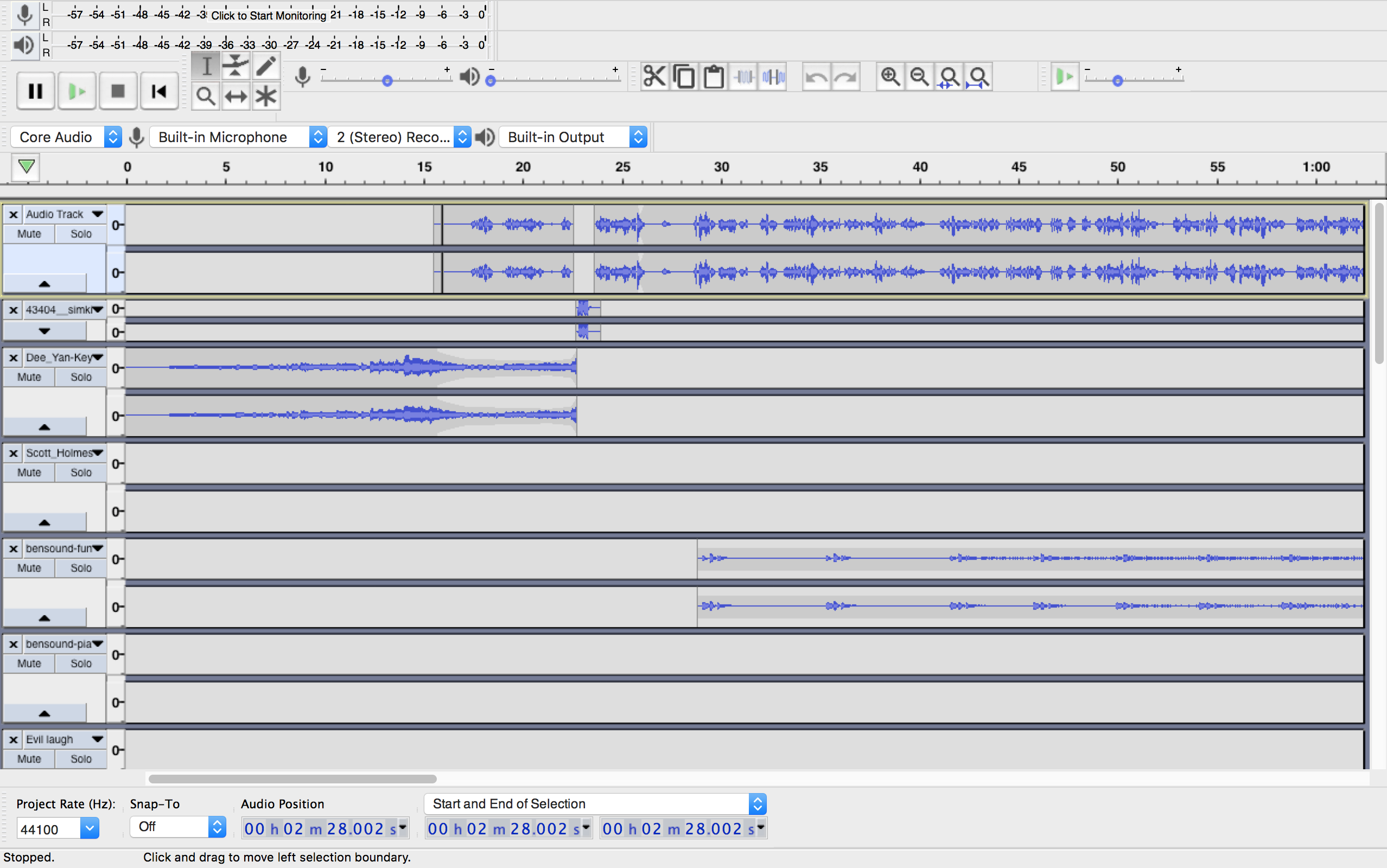 Ah, yes, the web design unit. As I mentioned, I struggled the most with this. The actual HTML and CSS was completely new for me, but I think I was able to accomplish a pretty nice design overall due to my artistic eye. I ended up liking the styling and coloring I chose for the site, but was ultimately frustrated by my lack of know-how on the back end for fixing errors in the HTML. I was able to ask Ben for help and utilize tutorials to get by, but as a perfectionist I would have preferred an even better design than what I ended up producing. At the end of the day though, I am proud of my progress and ability to turn what looked like a broken webpage into something visually appealing. For the final portfolio, I had wanted to fix the header but ultimately failed at this. I thought I had figured out how to center the text when viewing in Chrome (as you can see in the thumbnail) but when switching to Safari it would appear the text is still off-centered. However, I did add a link which was another goal of mine for the final portfolio. Although I wasn't able to fix everything on my site, I feel this is because the jumbled mess of html I have to work with with now clearly was not organized/set-up properly in the first place. I am confident after working with a template for the group project that if I were to build a website from scratch again, I could do a better job organizing the markup to make changes in the formatting. 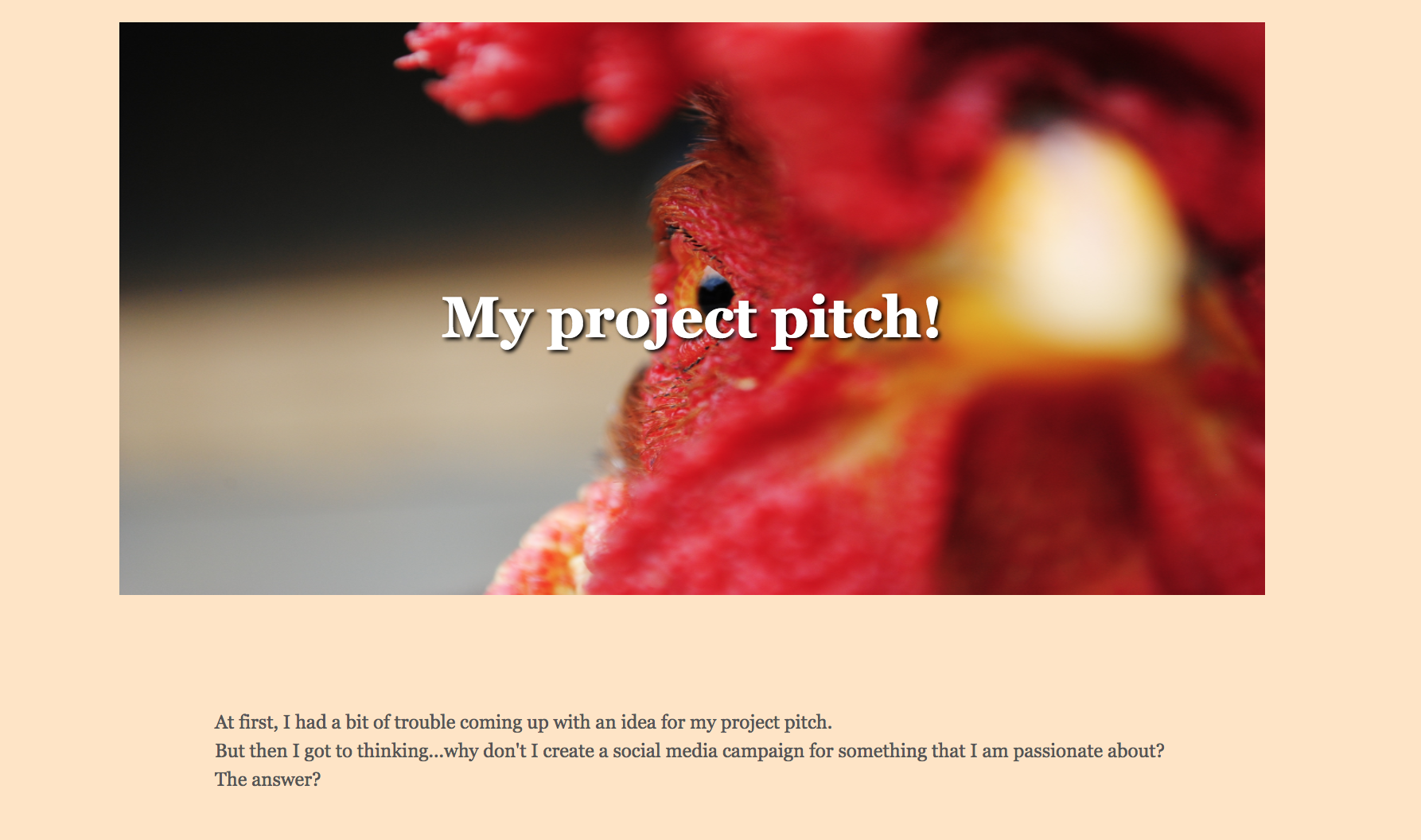 The final group project gave me the opportunity to fully express myself in a lighthearted way. I think my group worked well together and we created a cohesive campaign with nice logo, cover photos and website. Creating our graphics took more time than expected and I do wish we had time for a tongue-in-cheek style campaign video, which would have been hilarious. However, I am happy with how the project turned out and am particularly proud of the website I designed. Though I used a template, I made many changes to the HTML and CSS and was able to style the website as I desired to match the branding of social media accounts. 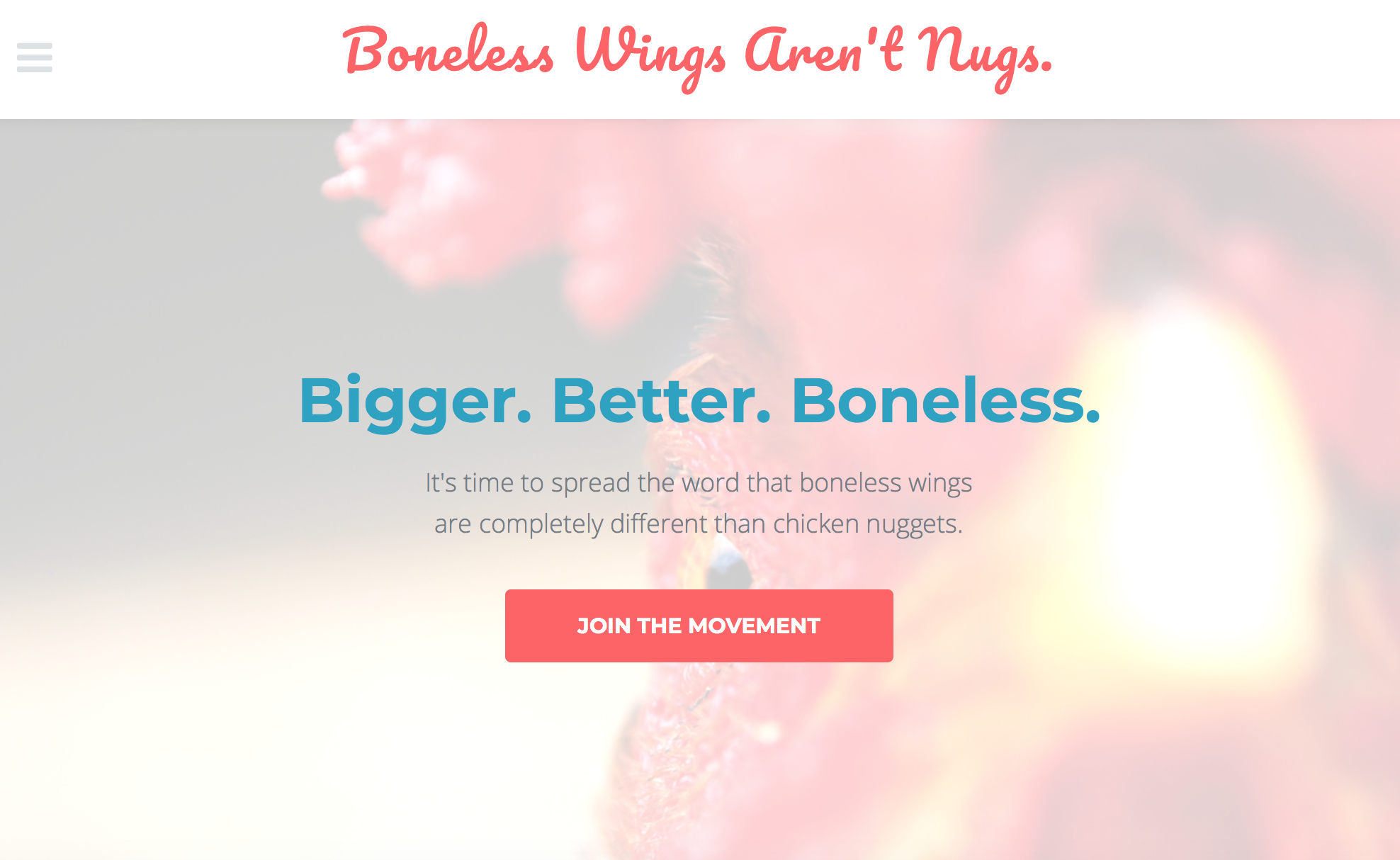 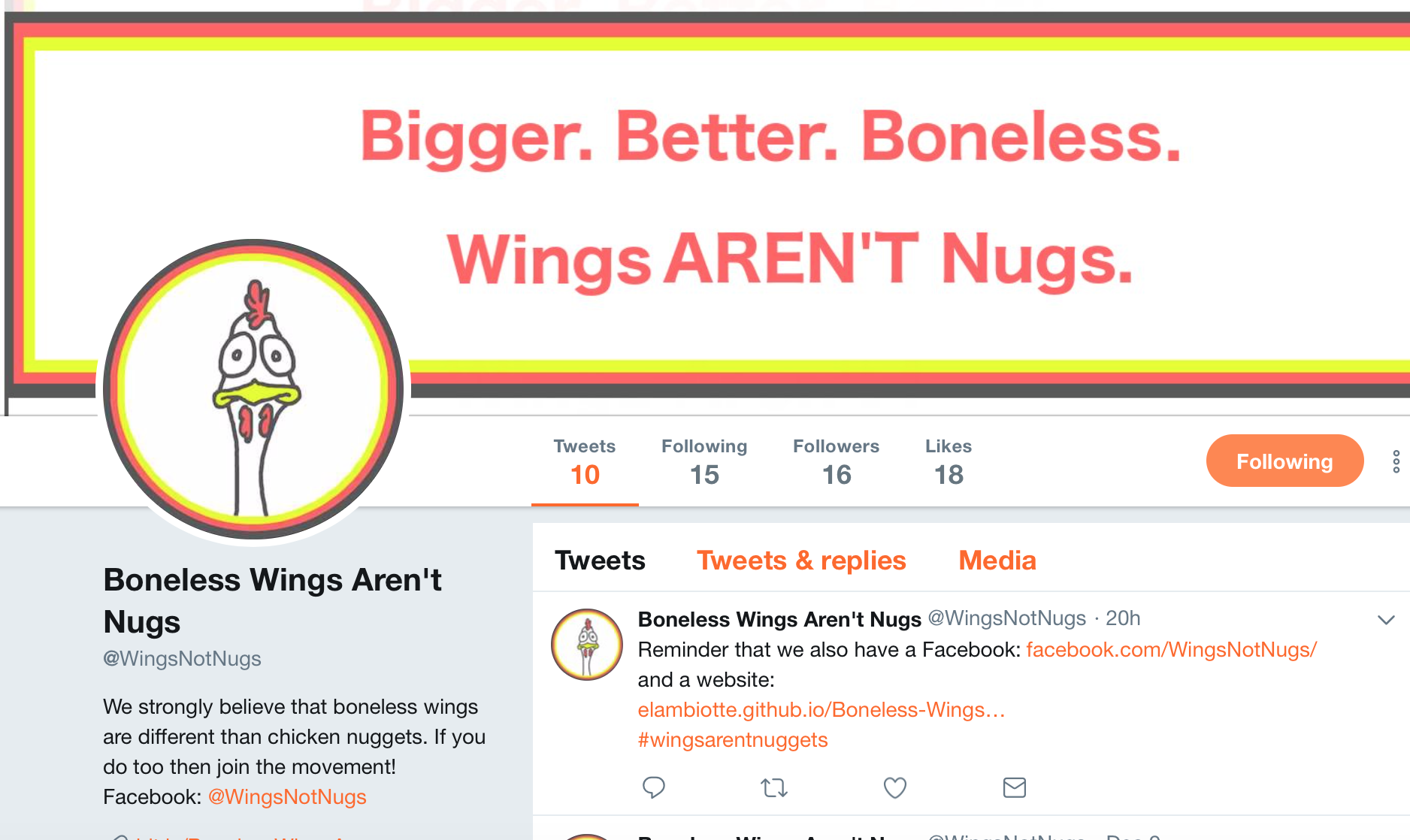 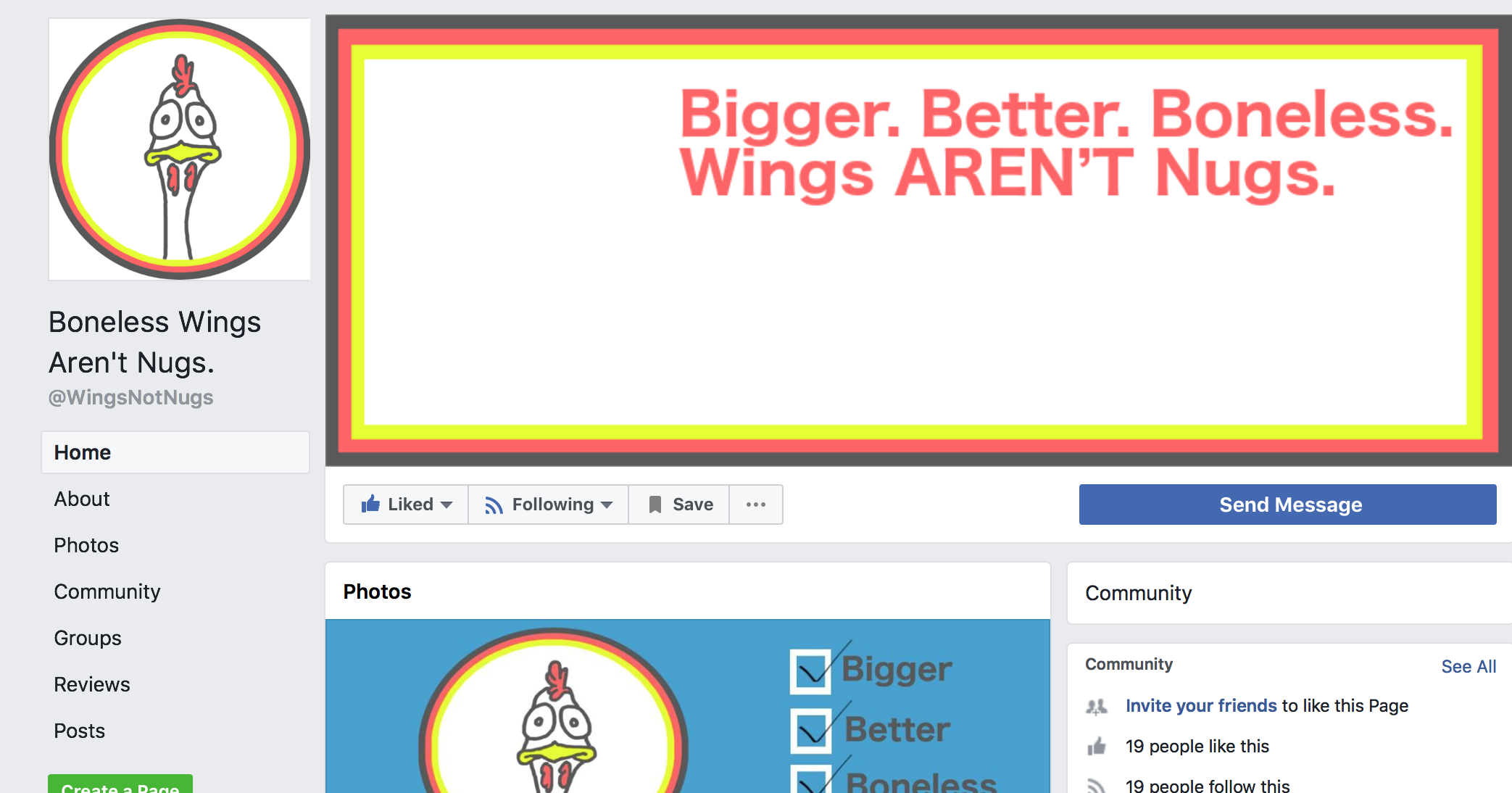 All in all, I am happy with the work I produced throughout the course of this class and my growth as a designer. Thank you for a good semester!