I wasn't entirely sure what to expect when I added this class to my schedule for the fall semester. Entering the room for the first time was a little intimidating due to the amount of seniors and older students in general taking the class also. It was a pleasant surprise seeing the variety of projects that we would become immersed in over the semester. Image editing, audio recording, website creation, and the collaborative unit provided a nice balance that kept the class interesting. 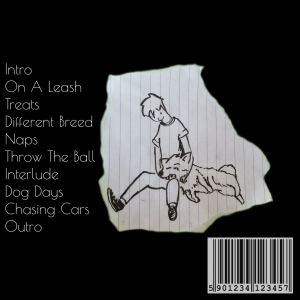 I went into the visual unit with previous experience using photoshop for different high school classes. However since I didn't have a current subscription I decided to instead use GIMP to combine and edit images together. I had never used GIMP before and would say that there was a learning curve when attempting to use the same techniques I had learned in photoshop. Finding out how to use GIMP's tools like editing the picture gradient, shadow, applying text and stroke, and layering the images took some time but I was still able to devote a significant amount of effort to the creative component of the image. I love being able to integrate drawings into class projects and the style of the album cover gave me a lot of creative liberties to work with. Drawing the pictures and uploading them to the project was fun but I think that adding the final touches like the price tag and barcode really contributed to the quality of the project overall. Without the labels the image wouldn't have been easily distinguishable as an album cover. 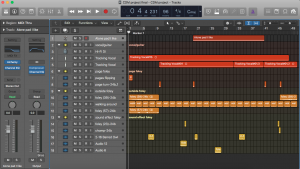 As with the visual project, I had previous experience with audio editing and music production prior to this project. I was also able to use my own software Logic Pro X instead of Audacity. I unfamiliar with processing and editing my own recorded vocals with plugins though. It was interesting experimenting with different reverbs and finding out exactly what certain plugins did to the recording like the DeEsser, which helps subtract background noise and cleans up the voice a bit. Unfortunately, the vocal didn't end up as clear as I wanted it to be and Ben talked to me in office hours how I could have brought more emotion into the reading. Rerecording the vocal would have meant restructuring the entire project file however as there are several atmospheres and sound effects present that play at specific times in the dialogue. With my other projects and finals this week I ultimately found that I didn't have the time to perfect the project. Nevertheless, I'm still satisfied with the final product and am happy that I was able to implement new techniques like recording and processing vocals, guitar samples into a project.

This project was where I first had to use tools that were entirely unfamiliar to me. I had never worked with HTML and CSS code previous to this unit. I had a small amount of experience with Javascript as I was taking an Intro to Programming course alongside this class over the semester. I had to go through the majority of the coding tutorial and look up many different things on the internet to efficiently work through and troubleshoot the process of designing a webpage. I decided to use a template from the internet, which made some aspects easier and others more difficult. The end product was a site that looked visually appealing and had a lot of cool functionalities that I wouldn't have been able to code otherwise but editing anything from colors to images was a chore because you never knew if a slight change would unintentionally messing up the entire site. It was also difficult locating specific elements in the code to change as the css file for the image was close to 2000 lines of code long. This project ended up being a sometimes frustrating, but overall enjoyable learning experience with a successful final outcome.

I definitely had the most fun with the collaborative unit for this class. Our team experience was unique and oftentimes hilarious considering the content of our social media campaign. I got along really well with Sammie and Taylor and we never ran into any trouble with each other working through issues, providing feedback, etc. The relaxed atmosphere of the studio sessions contributed to this. I primarily contributed to the visual components of campaign by designing the logo and headers for the social media sites and the webpage. I used the tools and knowledge from the visual unit to create high quality images and was able to efficiently resize and edit them when we ran into resolution and website application issues. I was also able to help Taylor with uploading the pictures to the website template as she hadn't used one before. Other than the visual component I also operated the twitter account by scheduling tweets and interacting with different people who were mentioning boneless chicken wings. This project was differed from the others due to the group atmosphere and collaboration. There was a lot of back and forth communication between us to produce final products of the site and social media accounts that we could be proud of.

I found that group discussions, instructor comments, office hours, and in general having class time to work most positively influenced learning new skills about composing digital media. The textbook was interesting to read but truthfully I found the majority of the content to be common sense and knowledge. The homework readings and videos were interesting and helpful though!

I definitely succeeded in attaining most of the goals I set for myself this semester. My largest regret was not being able to perfect the audio project to its highest potential. Website coding and design was a struggle for me as well. Ultimately though, I feel satisfied with my work for all of the units. If I had to choose a project that was the most successful I would pick the visual project as I think it came out pretty well and I don't think there's anything about it I would change. I would really like to make it clear that I really enjoyed the collaborative unit the most though. It was a fun learning experience working with other people on a social media campaign, which I had never done before. I feel like the greatest strength of my work differed from project, though I do think that I had a unique skill to offer for each (ex. drawings for visual, music production experience for audio, website template for the markup unit).

Moving forward I will definitely take the new skills and techniques I learned in the visual and audio units and improve upon them in the future for other projects. The web design unit gave me a lot of new knowledge was definitely a useful skill to learn. The collaborative unit gave me more unique experience working in groups. In terms of revising I can't think of anything off the top of my head that I would change about the class format. Thank you to Ben and everyone else in the class for creating a truly enjoyable atmosphere for expressing creativity through digital media.